A Conspiracy, or, What Else Could It Be?

Who: David Horsey
What: "Herman Cain and the liberal media conspiracy", SeattlePI.com
When: November 30, 2011

Because it's always a liberal conspiracy, you know .... 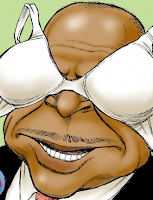 This conspiracy goes back much farther than the brief months of Cain's campaign, of course. It began back in the 1960s when the liberal media elites identified a Kenyan-born baby with an American mother; a child they could groom in secret to become their tool to destroy Christian America. They arranged a fake birth announcement in Honolulu's newspapers, indoctrinated the boy in the Muslim cesspool of Indonesia and, when the time was right, brought him to the exotic, multiracial pleasure garden of Hawaii where he could easily fit in and begin his surreptitious climb to power ....

.... Why, you may ask, would media companies that are deeply enmeshed in the capitalist system and run by rich families and Wall Street investors be so devoted to replacing American free enterprise with Kenyan anti-colonial socialism? And how, you may also wonder, could they be so prescient, so forward thinking that they could plot the rise of a Kenyan baby to the White House, yet not notice until it was too late that Craig's List and Google were stealing all their business?